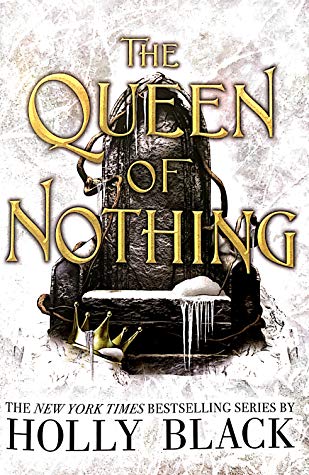 “It’s magic I long for, magic I miss. Maybe I even miss being afraid. I feel as though I am dreaming away my days, restless, never fully awake.”

Long live the Queen of Elfhame.

With a full – and heavy – heart I sit down to write this review. I am so happy to have been able to go on this journey with Jude, but utterly heartbroken that our time with them is over.

One of the things I love the most about books is that even though the story is over, we can always pick up the first novel and start all over again.

So, without further ado – my thoughts on the Queen and her King.

Long live the Queen of Nothing.

From GoodReads: After being pronounced Queen of Faerie and then abruptly exiled by the Wicked King Cardan, Jude finds herself unmoored, the queen of nothing. She spends her time with Vivi and Oak, watches her fair share of reality television, and does the odd job or two, including trying to convince a cannibalistic faerie from hunting her own in the mortal world.

When her twin sister Taryn shows up asking of a favor, Jude jumps at the chance to return to the Faerie world, even if it means facing Cardan, who she loves despite his betrayal.

When a dark curse is unveiled, Jude must become the first mortal Queen of Faerie and uncover how to break the curse, or risk upsetting the balance of the whole Faerie world.

The Book Dragon/Cat Lady Breaks Down…..

Black’s writing was on par with the rest of her novels. I feel like I can’t say that the story and plot were fantastic without saying that the writing was as well. The amount of snark, sass and cunning that Black weaves into the characters, dialogue and even the setting sets her books apart in their own way. You know immediately from the character’s phrasing and condescension that it is one of Holly Black’s creations.

I was particularly happy with the progression of the final chapter of the story. Twitter and Instagram made me super nervous but when I finally got them out of my head and sat down to read the novel, I flew through it with lightening speed and enjoyment.

As with each of the books before, the story is not quite what it seems. I wasn’t sure what to expect when Jude was exiled to the mortal world, unable to return to Elfhame. I was tickled by the description of daily life with Oake and Vivi. The simplicity of it, yet the complexity of understanding life as a mortal, without any magic or real threats looming over them.

I really loved that the book started off with a bang, immediately diving straight into the drama that is the high court. It’s something I’ve come to expect from Black’s books. In an instant, Jude is thrown back into the fray, risking her life for a sister that had turned her back on her, for all intents and purposes.

QoN is about relationships at it’s core. We explore Jude’s relationships with Cardan, her sisters, her brother, the Court of Shadows and finally, with her father, Madoc. The ever complex relationships of families never stops being a topic that I love to explore, no matter how heartbreaking.

“But for one final night, he’s the father I remember best, the one in whose shadow I have—for better or worse—become what I am.”

The hardest relationship, for me, was definitely Madoc and Jude’s. This relationship tore me up. Every. Single. Time. Each interaction was laced with hatred and love, each one battling to dominate the other. I can’t even fathom having to be raised by the man who slaughtered your family, and growing to love him – in some manner. I mean, realistically, it would be hard for a child not to develop some type of love for the person who raised them, despite any challenges or horrors. It’s a typical response to surviving trauma, as well, so it was not surprising to me. On the same token, Madoc’s struggle was just as evident. He holds real love for his daughters, he lets that slip in many conversations, even when he tries to mask it, using anger and power to cover up the pain he feels as well. Madoc’s acts of violence and aggression are clearly out of the inability to understand and manage his own emotions. The only thing he loves more than his family is power, power that Jude has and power that Madoc wants.

Jude and Madoc play a dangerous game of Cat & Mouse, and they are truly the Game Masters of this novel.

It’s hard to say much without spoiling key plot points, but know that even though some of them are predictable (and I know how the book community HATES predicting the plot twists *insert eye roll*) they are satisfying and brilliantly done.

“We have lived in our armor for so long, you and I. And now I am not sure if either of us knows how to remove it.”

Ah, the girl of the hour – Jude. Jude both infuriates me and makes me fall more in love with her with each book. Jude made decisions rashly and sometimes without any consideration for others through out the series – however, now with the fate of everything she loves hanging in the balance, we watch as Jude battles with her training, her love of her family – despite their betrayals, and her love hate relationship with the High King of Faerie himself – Cardan. We all know that she loves him far more than she hates him, thus leaving her in a position that she can’t quite grasp. How to handle the feelings she cannot keep denying, and still hell bent on destroying him for banishing her to the mortal world are two things that Jude does a very poor job at handling.

Speaking of the High King, he waltzed in again and stole my heart. Cardan of Greenbriar you are a bastard and we love you so much. I really would hate him with a loathing far greater than Jude’s if he was a real person, but alas, he is not – so I love his lying, conniving, scheming pointed tail ass so much.

He is such a complex and twisted character. After reading QoN, though, I completely understand why. My heart ached for the way his parents treated him, the way his siblings tossed him to the side, and the way no one really cared about what happened to him.

I will say that with all of the plot twists in this novel, I did not see the biggest one coming until it was far too late. This shattered my heart and annoyed me beyond measure because I am not typically that clueless. Haha! I’m not the only one, I’ve learned, so I’m chalking it up to it meaning that Black can catch even the cleverest among us off guard.

One of the things I really did love about the story was Vivi & Heather‘s arc. That was one of my favorite parts of the story, and the devotion to Heather, despite what she feels or things was touching and made my gay heart sing. They went through so much turmoil in TWK, I really hoped for a happy ending with them – not the roller coaster of a ride that was delivered to us via QoN. 😉

Madoc is still a dick, and that’s all I can say. He is a pivotal part of the story, but I wish he would just die, OKAY?!

One of the characters I was most baffled by was The Ghost. I really didn’t expect the first betrayal in TWK, and the twist that surrounds him in QoN really sent me on a ride through out the book. I was satisfied with his over all arc though.

Nicasia – I can’t help but love our vicious little mermaid. She comes a long way in QoN, and I’m always down for that, even if a small part of me died a long with her hatred.

The Folk of the Air series really took me for a ride. Regardless of my personal feelings surrounding the decisions Black has made recently, this trilogy has been a well written, page turning, sadistic and twisted love story that I could not get enough of. I will probably continue to reread this series in the years to come, as there is always something new to discover on a reread. For now, I will finish this journey with the close of QoN and place Jude and her adventures on my shelf, safe and sound on her throne — Or is she? 😉

Holly Black is the author of bestselling contemporary fantasy books for kids and teens. Some of her titles include The Spiderwick Chronicles (with Tony DiTerlizzi), The Modern Faerie Tale series, the Curse Workers series, Doll Bones, The Coldest Girl in Coldtown, the Magisterium series (with Cassandra Clare), The Darkest Part of the Forest, and her new series which begins with The Cruel Prince in January 2018.

She has been a a finalist for an Eisner Award, and the recipient of the Andre Norton Award, the Mythopoeic Award and a Newbery Honor. She currently lives in New England with her husband and son in a house with a secret door.  (less)